Lough Melvin is a beautiful unspoilt lough famous for the diversity and number of salmonids that inhabit it. The lough has salmon, char as well as gillaroo, ferox and sonaghan strains of trout.

The sonaghan is a sub species of brown trout that only occurs in Melvin. This little fish, although only growing to around 2½lb, puts up a great fight.

The gillaroo is a lovely golden coloured trout that grows a bit larger and is similar to the gillaroo found in loughs around the midlands.

The ferox is little fished for in Melvin although fish of up to 15lb are often caught by accident (rather than design) while trolling and sometimes on the fly. Salmon are caught right throughout the season. Spring fish can be caught all season, with grilse being caught from May onwards.

Trout fishing can be patchy early in the season, but Kinlough Bay can fish extremely well in March and April with the sonaghan concentrated in the top of the lough early in the year. The fish then start to spread down the lough and through the rest of the year productive areas include the sunken islands, Farell’s Bay, the shores along Inishmean Island and Church Island, Rossinver and long drifts down towards Garrison.

The sonaghan however, can be caught anywhere in any depth of water (140ft in the middle!). Since their staple diet consists of mainly daphnia, the sonaghan occur where the daphnia are concentrated. The gillaroo are found close in to the rocky shores and around the sunken islands. Their staple diet is mainly the molluscs that live on these shores. A good wave is normally needed before the gillaroo will come to the fly. 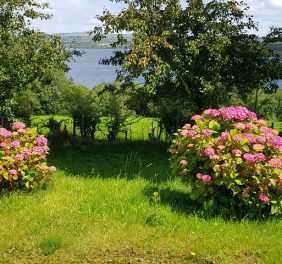