Leitrim village is the gateway to the Shannon-Erne Waterway and boasts a harbour with excellent facilities for the cruising traffic which passes through.

The ruins of a castle and memorial plaque can be found at the harbour. It was built in 1540 by Brian Rourke of the O’Rourke dynasty. This family ruled over the Kingdom of Breifne from the 10th to the 16th centuries and this clan was the last to submit to the imposition of British rule.

The Kingdom of Breifne was made up of the counties of Leitrim and Cavan. The eastern part was O’Rourke country and the western areas were ruled by the O’Reilly clan. Relations between the rival clan’s frequently boiled over and many battles were fought on these lands. Try to imagine some of these scenes when cruising through the various locks on the canal.

The castle was also said to be the destination of the great O’Sullivan Beare and his Irish forces as they began their famous march in 1602, following defeat at the Battle of Kinsale. The battle was the final meaningful attempt by the ruling Gaelic tribal leaders of Ireland to stave off submission to the crown of Queen Elizabeth I.

Having been declared outlaws, O’Sullivan Beare decided to undertake a gruelling 300-mile march from Cork to the safety of his northern allies and the O’Rourke’s. The contingent was under constant attack during this endeavour and of the 1,000 men that set out, only 35 reached the O’Rourke’s refuge.

Situated 7 km from both Carrick on Shannon and Drumshanbo you will find all amenities as well as hill-walking, golfing and horse-riding nearby. 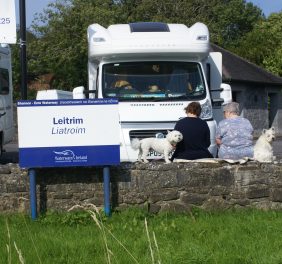