The place name Dromod means “long ridge” and the old Sligo to Longford Coach Road, part of which is still visbile today, follows along the top of the ridge.

A large windmill stood at the top of this ridge, but it was blown down by the Big Wind of 1839.

The old Garda station in the village was orginally built as a corn mill. The mill used water from the Eslin River, which was carried there by a canal.

There was once known for a traditional of smelting iron and there is a record of charcoal being made in Dromod in the 1600s.

The old harbour in Dromod was built in 1829 at a cost of £139 and provided a means of transporting goods to the village by water. This was later replaced by road and rail.

The harbour has been in use for over 150 years and was once a busy port, with barges full of Guinness, turf and medical supplies commonly docking. Dromod was also an important stopover town from 1887 to 1959

The harbour, which is busy during the summer months, boasts some stunning views. It is well maintained and allows for easy access to the town where there are a number of of restaurants and bars to choose from. 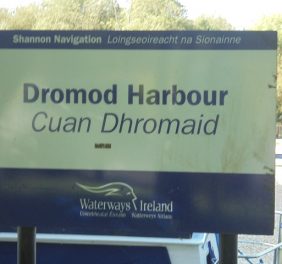