The Cavan-Leitrim Railway Museum, in Dromod is must for visitors to the area. The museum offers visitors an informative look back at a variety of narrow gauage trains, as well as a selection of vintage buses, planes, fire tenders and war artillery.

The museum, which was established in 1993, is run entirely by volunteers. The museum is located beside the Irish Rail station in Dromod on the grounds of the old Cavan and Leitrim Railway yard.

One of the original locos (no. 2) and one of the original carriages are preserved and on display at the Ulster Folk Park and Transport Museum, Cultra and No. 3 “Lady Edith” is in the United States at the New Jersey Museum of Transportation.

The Cavan & Leitrim Railway was a 3ft gauge narrow-gauge railway in the counties of Cavan and Leitrim. The railway opened in 1887 and was closed by CIE in 1959. Unusually for Ireland, this line survived on coal traffic, from the mine at Arigna. It outlived most of the other Irish narrow-gauge lines, giving a further lease of life to some of their redundant engines. It was the last steam hauled narrow gauge line in Ireland.

The heritage operation at Dromod began with a visit from the Irish Narrow Gauge Trust in 1992. They inspected the site and discovered the original Cavan and Leitrim railway building standing, the water tower and amazingly the original engine shed buried under ivy.

The preservationists were able to enter the shed which had lain in the same condition as last used, with the smell of steam and soot in the air. They also were able to walk along 1/2 of a mile in the Ballinamore direction as far as cloncoolry crossing. The trackbed being in reasonable condition.

Enquiries were made and Dromod station building was purchased along with the station site and the trackbed as far as Cloncoolry. The railway was relaid with sidings, a new workshop and a carriage shed.

The INGT brought its collection of wagons, carriages, artefacts, diesels and a steam loco to Dromod. The first public service operated in late May 1995 with Fowler built diesel “Dinmore”, and the first steam service in early June 1995 with 1916 built Kerr Stuart”Dromad” and the CIE west clare carriage.

There has been a number of aquisitions over the years including a collection of aircraft and buses. The most prominent project to date has been the restoration of the 1908 Avonside built steam loco “Nancy” with £160,000 being spent over 20 years on her restoration.

Dromod is a unique family attraction being the only location in Ireland where visitors can board an airplane cockpit and view heritage steam and diesel locomotives.

Dromod has featured in several TV programmes and Documentaries including, John Creedon’s Atlas of Ireland on RTE1, the BBC series presented by Michael Portillo on “Great Railway Journeys” and featured in a TG4 documentary “Beidh Me ar Ais” last year which was of great benefit for the railway. 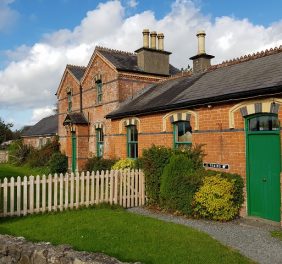