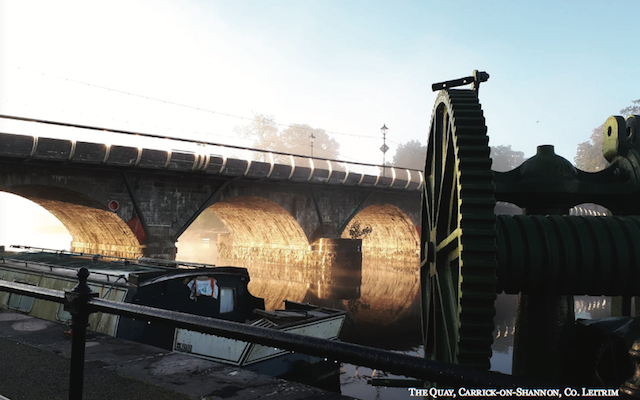 As the Shannon winds its way through Carrick-on-Shannon, the Quay is the ideal stop off point for boats looking to access the town and its myriad of bars, restaurants and tourist attractions, writes Martin Branagan.

Near the bridge are the remains of  ‘The Castle Drumruscke’ which was in English hands except for the period 1648-52 when it was held for the Irish by Roger Maguire.

The Shannon navigation was developed from the 1770s onwards. In 1846 the present bridge and quays were built. Prior to the closure of the Grand Canal Company in 1960, Carrick-on-Shannon was an important depot for river trade.  The Old Barrell Store, now the Tourist Information office was the warehouse for Guinness stout.

From the Quay it’s just a short walk to the centre of town, and all its amenities. The Quay is also home to Carrick’s legendary cruiser Moon River, which is a “must do” attraction in the town

There is lots or room to moor your boat, even in high season. A boardwalk, which forms part of the Riverfront Amenity Park, which was officially opened in 2007, extends down along the N4.