Visitors to Leitrim will find a wealth of attractions dotted throughout the county, many of which are free to visit. 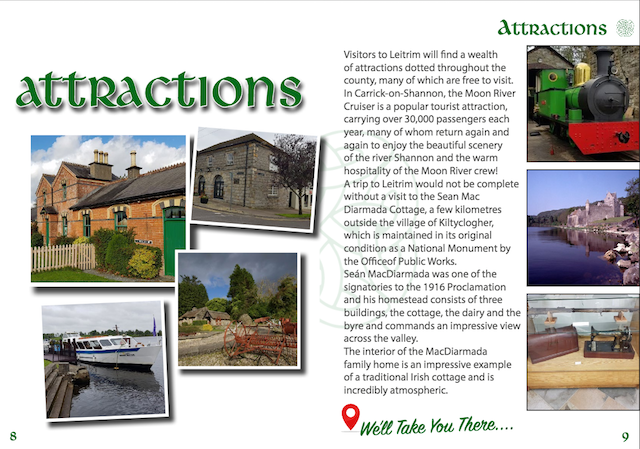 In Carrick-on-Shannon, the Moon River Cruiser is a popular tourist attraction, carrying over 30,000 passengers each year, many of whom return again and again to enjoy the beautiful scenery of the river Shannon and the warm hospitality of the Moon River crew!

A trip to Leitrim would not be complete without a visit to the Sean Mac Diarmada Cottage, a few kilometres outside the village of Kiltyclogher, which is maintained in its original condition as a National Monument by the Office of Public Works.

Seán MacDiarmada was one of the signatories to the 1916 Proclamation and his homestead consists of three buildings, the cottage, the dairy and the byre and commands an impressive view across the valley.

The interior of the MacDiarmada family home is an impressive example of a traditional Irish cottage and is incredibly atmospheric.

The Cavan-Leitrim Railway Museum, in Dromod is a must for visitors to the area. The museum offers visitors an informative look back at a variety of narrow gauge trains, as well as a selection of vintage buses, planes, fire tenders and war artillery.

The museum, which was established in 1993, is run entirely by volunteers. The museum is located beside the Irish Rail station in Dromod on the grounds of the old Cavan and Leitrim Railway yard.

400 metres of track has been restored and remains preserved after its closure in 1959.

Following the closure, all that remained in Dromod was the Station House, the engine shed and water tower. Today they have been restored and have been preserved.

The Cavan – Leitrim Railway was a 3ft narrow-gauge railway in the counties of Cavan and Leitrim. The railway opened in 1887 and was closed by CIE in 1959. Unusually for Ireland, this line survived on coal traffic, from the mine at Arigna.

Drumkeerin Heritage Centre is situated on the site of Drumkeerin Vocational School, which closed in 1987 after the opening of Lough Allen College.

The old Vocational School is now the Community Centre and the cottage to the rear is the Heritage Centre, which was a 200 year old cottage near Arigna (stones numbered and rebuilt there)The complex was officially opened in 1995.T

The old machinery to the rear was donated by local farmers and evokes memories of a bygone era. Tours are always welcome, however, please telephone ahead to advise the centre as to the number of people. 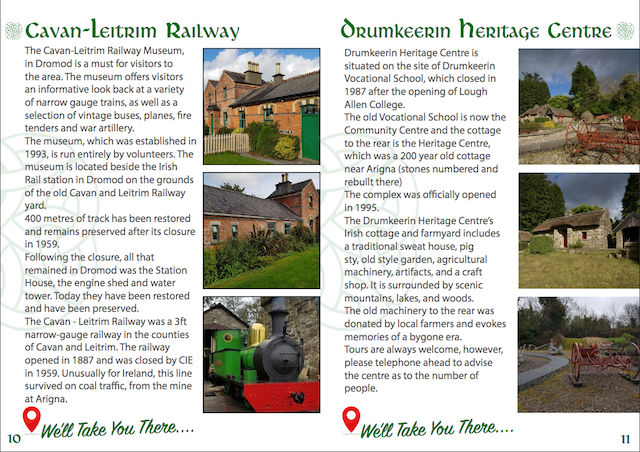